Missing in Ohio: Two years of “torture” for the Koby Roush household 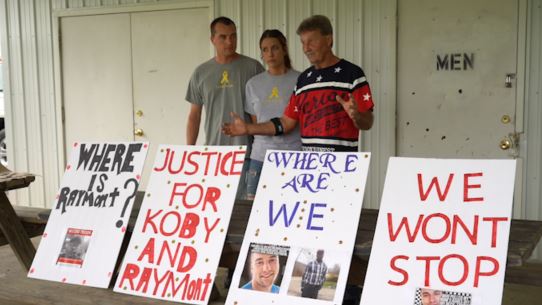 Family members of Koby Roush held signs reading ‘Where’s Koby Roush?’ ‘We won’t stop’ and ‘Justice for Koby and Raymont’ as they marched in Somerset on Sunday to draw attention to the plight of the two missing men .

Koby Roush, 24, and Raymont Willis II, 42, disappeared within a day. Willis went missing in Waverly on July 4, 2020. Roush’s car was discovered abandoned in Jackson on July 5.

The couple is linked through a third man, Luke Farmer, who died of an overdose on July 21, 2020.

“We know he was murdered”

“There are many, many horror stories — I’m not sure which ones to believe,” Roush’s father Mark said ahead of the march. “We know he was murdered. For me there is no doubt. My son would have called me a long, long time ago. He called me at 6am the last day I spoke to him.”

City works over no stream, Trash at Latitude Five25

After Koby Roush disappeared, people turned to the family with gruesome tips. They told them Roush was fed to pigs. Unbeknownst to the Roush family, people had told Willis’s family similar stories about their missing father, Raymont.

They just have to be caught

Roush said Michael Saylor’s family contacted him because the circumstances surrounding their sons’ disappearance were so similar. Benjamin “Michael” Saylor, 30, was reported missing on July 29, 2019.

“People in this area are terribly good at disposing of bodies,” Roush noted of the area where his son’s car was found. “It’s pretty obvious.”

Roush recalled his conversation with Michael Saylor’s father, who reportedly said, “‘You know what? I got a call from my son saying that the last time I saw him he broke down. [The Saylors] Get all those horror stories. They’re in wells, they’re in caves. They do all these checks and finally found the body through… a woodcut. Someone pushed the body around.”

Saylor’s remains were found on CH and D Road on January 11, 2020. The distance is approximately 19 miles by car from CH and D Road to Mt. Carmel Road where Koby Roush’s car was discovered.

“Now they’re getting a little bit better at disposing of things,” Roush said, referring to the people who know what happened to his son. “You hear about shredding them up, putting them in barrels and running them through wood chippers. They just have to be caught.”

During a search with Golden Hearts, a Voice 4 the Voiceless in June, Koby Roush’s family found his clothes in Chillicothe.

“It was kind of shocking,” said Mark Roush. “They actually found the clothes, Golden Hearts, and they wanted us to look at them and see if we knew them, and that was the last outfit I saw Koby in. I washed his laundry. When he left my house, that’s exactly what he was wearing.”

But it’s frustrating for the family not to know if law enforcement did anything with the evidence.

“They don’t tell you anything,” Roush said. “They have a lot more information than we know. Apparently, they don’t want to share it because they fear it will leak out and ruin their investigation. But you get the feeling that they have achieved nothing.”

Roush’s family has offered a $5,000 reward to help locate him. They ask hunters and gatherers in the area to keep an eye out for his remains.

Anyone with information about the case can call the Ohio Bureau of Criminal Investigation at 855-BCI-OHIO (855-224-6446) or file a missing person report through the BCI website. You can also contact Crime Stoppers and leave an anonymous tip at 614-461-8477 or online.

Absent from the Ohio series

Jantjies, the workforce’s nutritionist, who was despatched residence after rumors of infidelity