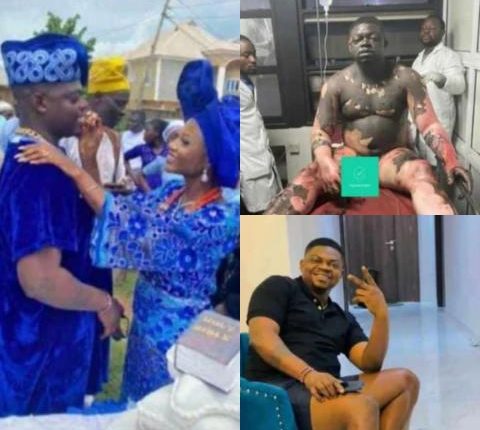 SaharaReporters had reported that Bamidele died after allegedly being set on fire by his wife Ifeoluwa over allegations of an extramarital affair.

Ifeoluwa, the wife of a Nigerian living in Egypt named Bolu Bamidele, who set her husband on fire last Tuesday in Osogbo, the capital of Osun state, because he had an illegitimate child, poisoned herself.
SaharaReporters had reported that Bamidele died after allegedly being set on fire by his wife Ifeoluwa over allegations of an extramarital affair.

Bamidele, popularly known as Teebam, is said to have returned to Osogbo, the capital of Osun State, from Cairo, Egypt, to give his wife a nice treat on her birthday.
The wife discovered, according to the findings, that Bamidele had cheated on her and even had a child outside of their union.
Ifeoluwa is said to have searched her husband’s phone and discovered the messages the deceased had allegedly exchanged with another woman via WhatsApp.
After confronting him with the information, an argument ensued.
The lady is said to have written angrily in her WhatsApp stories that she would take drastic measures.
She had said that her husband had “marginated” her and that people would be crying for them both before daybreak.
Bamidele was reportedly set on fire at his home in Koka village on Sunday, destroying all his belongings.
Meanwhile, Tribune reports that Ifeoluwa’s remains were taken to the morgue of Our Lady of Fatima Catholic Hospital in Jaleyemi, Osogbo, by police officers who reportedly decided to kill themselves to avoid the consequences of their act.
One of the hospital workers, who spoke to Tribune Online about the incident on condition of anonymity, said she was taken dead to the hospital by police and dumped in the morgue.
State Police Command Public Relations Officer Yemisi Opatola confirmed the incident and said she was the one who made it possible for the woman’s body to be taken to the hospital morgue.