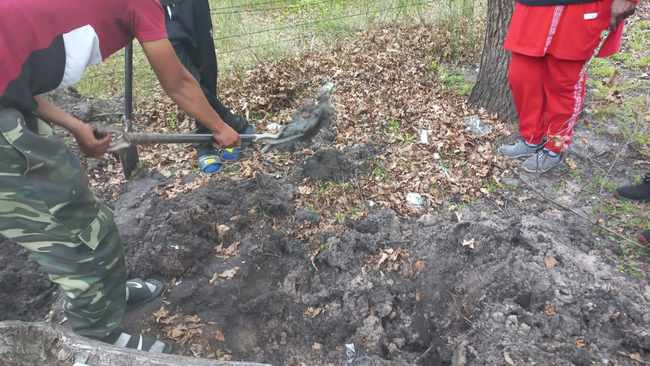 Organizing a missing person has not given up on Lorraine Jantjies, 78, who mysteriously disappeared in February 2021, and has started digging for clues with her own dogs in Genadendal.

This isn’t the first time Track n Trace teams have been searching where Jantjies used to walk every day.

Track n Trace is looking for clues as to what happened to missing Lorraine Jantjies, 78, from Genadendal. picture supplied.

All week they found themselves knee-deep in mud and pouring rain, walking through bush, rivers and steppes.

So far, one pair of pants has been found by the team that was already rotting due to age.

They are now hoping their dogs will point them in the right direction after a forensic search by police last year led to a dead end.

Jantjies mysteriously disappeared after leaving her home in Genadendal.

She was diagnosed with Alzheimer’s. Track n Trace is looking for clues as to what happened to missing Lorraine Jantjies, 78, from Genadendal. The house Jantjies was living in when she disappeared. It was allegedly set on fire by her son after she disappeared. picture supplied.

Police had previously confirmed that Jantjies’ adopted son, Gershwin Jantjies, 36, had been arrested in January 2022 after their home was set on fire.

The house was the same residence where Jantjies lived at the time of her disappearance.

Jantjies’ husband Freddie Jantjies, 78, died in August 2021 after suffering a stroke and recovering from cancer.

They are currently continuing their search.

“The area we’re going to focus on in the search for Grandmother Lorraine, we’re calling this area The Bompie. This is the first time we’re looking where we’re actually digging,” she said.

“When we looked there on Saturday, we found a pair of pants. The pants were almost rotten. I assumed it might be proof. We resumed our search during the week.

“We took our own dogs, which started digging in certain places. We want to see where the dogs are going and we will dig there.” Track n Trace’s Chaz Thomas said they had focused on areas familiar to Jantjies: “Due to the heavy rain we couldn’t search for more than an hour on Sunday. No new leads. We’ve focused on areas we haven’t searched yet.

“We searched Kloof, a bushy area. She used to like to go for long walks. We’ve searched the dam and river, and forensics have also conducted a thorough search.

The organization relies on donations for its search.

Police spokesman Sergeant Wesley Twigg said there had been no leads to the case and “the missing person has yet to be found”.

Jantjies’ nephew, Albert Adams, said the case was stalled and was aware of the search being carried out.

“There is now new evidence or information in the case and we have had no response from the police.”

Undeclared work is just not infidelity or promiscuity; let’s not be squeamish