Shaquille O’Neal Refuses to Condemn Ime Udoka, Instead Addressing His Own Infidelity 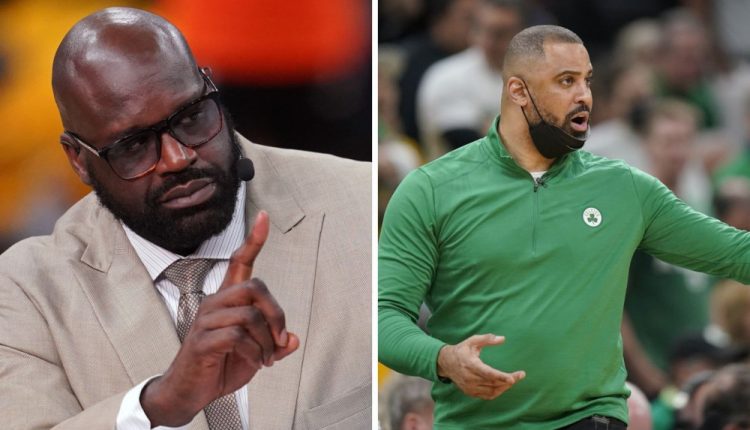 Shaquille O’Neal is unwilling to join Ime Udoka’s critics after the former Celtics manager was embroiled in a scandal that cost him his position.

NBA legend Shaquille O’Neal has admitted his own missteps in discussing the Ime Udoka scandal, saying it would be “blasphemous” for him to judge the issue because of his past infidelities.

Udoka has been suspended for the entire 2021-22 season by the Celtics for breaching team policy – reportedly having a close relationship with a staff member – and faces the prospect of never coaching the team again.

But O’Neal, who has admitted cheating on his ex-wife Shaunie O’Neal, made it clear he had no intention of blaming Udoka for his actions.

“I’m going to end this conversation,” O’Neal said on The Big Podcast with Shaq.

“I was a serial cheater. It would be insane and blasphemous if I stood here and said, ‘Boom, Boom, Bam.’ I can’t do this. I know these guys personally. I know they’re going through a lot because I’ve been through a lot,” said the retired athlete.

At one point during the podcast, Shaq even came close to tears when he admitted his mistakes led to a really painful divorce that kept him from seeing his kids for a long time.

“I’m never the type to come up here because of my platform and fake it,” he revealed. “I made it. I was the best at it. I’m not proud of it. I lost my family in the process and I lost precious and important years with my kids because of it.

So I refuse to stand up here and say, “You shouldn’t do that, you shouldn’t have done that,” he continued. “I’m not that type. I’m real about the situation.”

Now he’s committed to helping his friends learn from their mistakes. “I wish these two guys well,” added the Lakers legend, “and I hope they don’t lose their families because of what has been done.”

O’Neal married his ex-wife in 2002 before filing for divorce in 2009. In his memoir Shaq Uncut: My Story, released in 2011, he admitted his past infidelities.

“My ex-wife Shaunie and I were happy once, but I’ll admit it: I was a man. I was a man of too many choices,” he wrote.

“The decision to be with some of these women is up to me. I’ve never done it disrespectfully in my eyes, but of course I shouldn’t have done everything,” Shaq admitted.

“You know as well as I do that relationships are about maintaining … It wasn’t the big things, it was the small things, and that’s my fault,” O’Neal wrote in his memoir.

“I had things to do. I was trying to win, make some money. I admit I wasn’t the best partner. I just didn’t know how. I’m learning now.”

Since the divorce, the couple has raised their four children together.

Udoka has been engaged to actress Nia Long since 2010 and the couple have a son together.